(CLICK FOR FULL INTERVIEW: Posted in Greek, English Version at the bottom of link)

What was your first contact with Hip Hop and at what age? When did you start creating your own stuff? Which was first, rhyming or beatmaking?

Hip Hop was all around growing up. I was born in the ’80s and raised in the ’90s. That was the golden Era of NY Hip Hop. My first personal contact with Ηip Ηop was around when Ι was in middle school. I got a belt driven turn table and a Gemini mixer that had this little 12 second sampler. There was a record store in my town that Ι was at constantly. I just started collecting break records. I would play drum breaks and sample phrases from accapellas and play them over the breaks. That got me really hooked. It was around that same time when Ι was  10-12 Ι would memorize emcees verses. I have this memory of being at a corny middle school dance. And everyone wanting me to recite a verse. I spit a verse from B-Real word for word. It got a huge reaction. I was even more hooked.

Around when the movie Juice came out (1992) Ι was obsessed with Techniques. Those turntables were like the holy grail. You couldn’t scratch with a belt driven turn table. The local record store had a set up. So Ι would be over there constantly trying to see if they would let me mess with the turntables. Eventually they did, they were mad cool. Dude taught me how to mix, my first blend was a Marry J Blidge and Biggie record.

That little sampler on the mixer Ι had really gave me a itch to make beats.  Eventually I bought the Roland Dr 202 drum machine. Was a little cheaper than some of the equipment that was out of reach for a young teenager. I would mess with that. Gradually got more equipment over the years. Rhyming would come later. Once you had a beat, you wanted to hear some rhymes. So that would lead to writing. I think when Ι started high school Ι started writing verses. My entire high school days were filled with writing rhymes and trying to avoid doing school work at all costs. I already knew what I was after in my mind, it made more sense to use that time to start developing my own craft. I wasn’t really loving the bullshit history and pointless memorization school offered me. 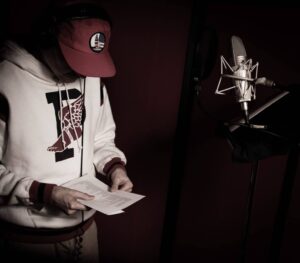