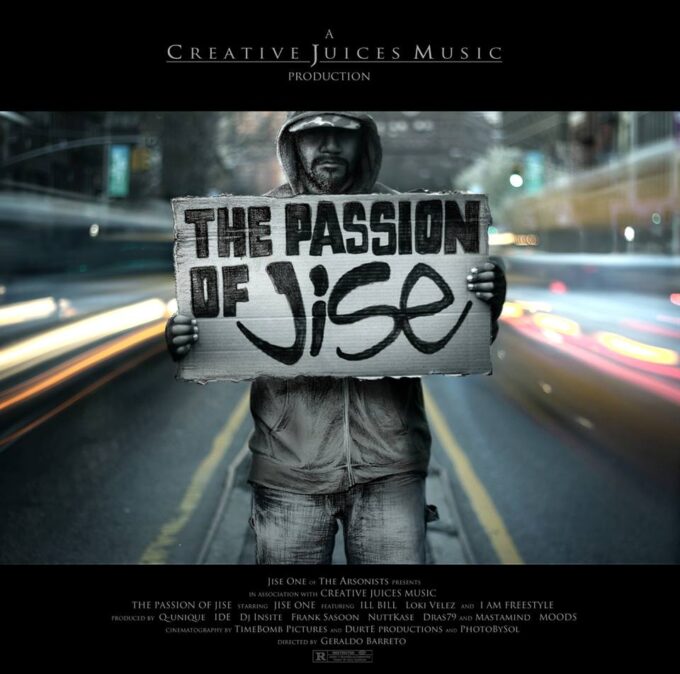 Creative Juices Music presents Jise – Passion of.  The Passion Of Jise is the most developed release from Brooklyn native Jise to date. Born Geraldo Barreto, the NYC artist has crafted a conceptual semi-biographical album that delves into what growing up in Brooklyn was truly like.

“The best way to describe my music or poetry is to listen to it” says Jise. “It’s difficult to describe. Someone once referred to it as ‘Abstract Poetry’ and that sounds good to me.”

The Passion Of Jise comes nearly 4 years after Jise’s critically acclaimed debut solo album, Chronicles 2. During that time Jise was compiling the correct pieces and carefully building the foundation of what would become The Passion Of Jise.

“A record should have more substance, something that means more than just battle rapping,” says Jise, “I want to paint pictures with poetry and music.”

“This album is a combination of old dream journals and poetry entries that date back to my early days as a teen” says Jise. “I stumbled upon my old journal entries and realized that it was an incredible foundation for an album.”

On Songs such as “Mommy’s Sunshine” and “The Best”, Jise weaves tales from various characters perspectives like Rumpelstiltskin wove straw into gold. Augmented by dark piano loops, these two tracks are as pleasing to the mind’s eye as they are to the ear. Jise’s lyrical tact on “Light Of Day” displays rugged poetry without sacrificing the song’s musical prowess. Jise creates his own lane in inspiration, making music without concern for whats trendy or fashionable. Rather believing that the best way is the only way; and that is through truth, love and sacrifice.

Be the first to review “Jise Passion of” Cancel reply